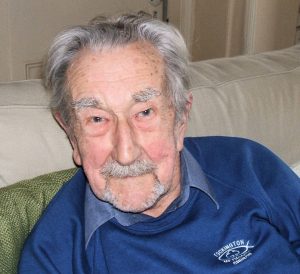 Jack Vokes organised the School Reunion held in 2007.  He gained national fame in December 2020 when he became the first person in the South West to receive the Covid-19 vaccine.  He aged 98.

Jack Vokes was born in Cardiff in 1922.  His father’ s job moved and the family moved to Charborough Road in Bristol.  When he passed the eleven plus Jack could have gone to several Bristol Schools but his Father took him out to Thornbury to see the Grammar School there and that was his first choice.  He had to ride a bike every day from Filton.  He was heart broken when his Father’s job moved again and he had to go back to Wales.

However after a year, another promotion for his father saw them back on this side of the river waiting for a house to be built in Almondsbury.  Jack was desperate to get back to Thornbury, and he persuaded his parents to let him lodge with the Trayhurn family until the house was built.

One of the highlights of his time in the school was the trip to Switzerland in 1938 with Mr. J. Sagar, and 12 boys.  They left Bristol by train to Paddington, then to the Ferry Newhaven/Dieppe, they were in Paris for breakfast and on to Interlaken –  all at a cost of ten guineas.  They had been due to go to Bonn but the government intervened.

Jack then started as an apprentice at Bristol Aero Engines, and ended his time as Chief Development Fabrications Engineer.  During his time there he flew in the Bristol Beaufighter and several other of their planes.

The press release for the reunion of former Thornbury Grammar School pupils explains the origins of the event that he organised  and the reasons for choosing the date (1st November 2007).

Like so many dormant seeds emerging from hibernation, older, “senior” members of the Thornbury Grammar School community came to the lunch held at The Ship Inn in Alveston last Wednesday, not sure what to expect, but thrilled that nearly 50 people turned out for an occasion arranged by Jack Yokes specifically to include 95-year-old former Geography teacher John Sagar, now resident in a nursing home in Bath, and timed to coincide with the visit of former pupils from California, Jeffrey Watkins.

The eldest former pupil, Joan Higgins, was at the School between 1929 and 1935, during the tenure of two headmasters, Mr R.W.Jackson, (what was his first name?), and Mr. S.J.V. Rouch, and there were several other octogenarians present, too.  It was family reunion time for Mervyn Pierce and his sisters Sylvia and also Barbara who met up with a former classmate Beryl Mackey, not previously seen since they left School 60 years ago!  Even the youngest amongst the gathering – Derek Hawkins, had left 55 years ago.

John Sagar was teaching at the Grammar School between 1935 and 1938, and had quite an impact in the School not only because he was young and good looking, but also a good and popular teacher in the classroom who played an extensive part in School life.  The School magazine listed: Spelling master, dance teacher, soccer coach, P.T. squad instructor, Dance Band director, Scientific Society leader, as well as the organiser of two memorable School Easter trips, to Belgium and then to Switzerland.  One unforgettable feature of the latter was the inducement paid to a train driver, having reached his terminus for the day, to take the School party onwards to their destination, thus avoiding a 2-hour walk! 2 francs each, that cost them!

Jeffrey Watkins was a pupil at the School, most remembered for his war-time exploits with the RAF. He joined at age 16 and trained as an aircraft mechanic, later being commissioned as a pilot.  He flew aircraft in Africa early in the war before returning to G.B. to complete two extended tours as a bomber pilot over Europe.  Never shot out of the air during a colossal 82 flights, neither did his crew suffer any casualties. Most significant amongst his flights was his part in a 29-Lancaster bomber raid into the Norwegian fiord at Tromso, to sink the German battleship Tirpitz, successful also in that all bombers returned unscathed. Each plane carried a 12001b, Barnes Wallis-designed “Tallboy” bomb. Jeffrey left the RAF in 1946, having been awarded the Distinguished Flying Cross for courage in active service.  Some years after the war, Jeffrey emigrated to the U.S. where he had to take out citizenship in order to take advantage of the opportunity to work on top-secret jet engine development, in the company of Frank Whittle and the leader of the German war-time jet engine project.  Jeffrey’s C.V. has included a B.Sc. and an M.Sc. taken during his mature years, is littered with contacts with distinguished aero engineers and projects.  And now, in retirement, he is much in demand for speaking engagements throughout the States and occasionally here, at home.”

To see photos of the reunion please click here