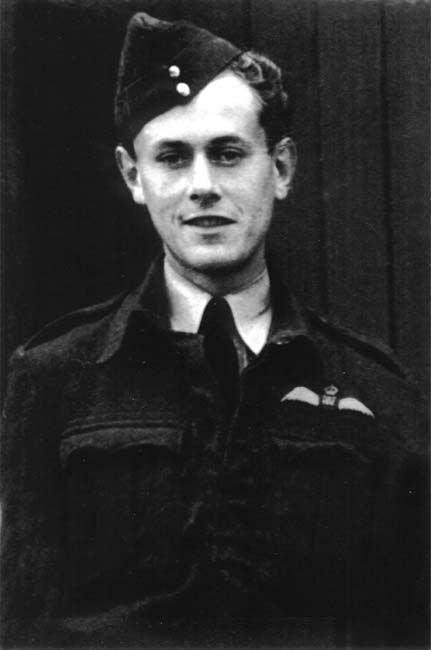 Jeffrey Watkins was born in 1921 in the back room of a cottage on Stowell Hill Road opposite New Road in Tytherington and lived there with his grandmother Mary Ann Smith (nee Livall) and his mother, her daughter Annie Smith.  He has many vivid memories of his childhood in Tytherington and has shared them with the Tytherington Roots website

At the age of eight he moved with his mother to live with his father, Frederick Thomas Watkins, at a house known as Heathview in the Hackett, near Thornbury.

He won  a scholarship to Thornbury Grammar School but left at 16 ½ to join the Royal Air Force in January 1938.  In the R.A.F.  he  progressed from a successful aircraft apprenticeship to gaining his pilot’s wings in 1940.  He then served for eighteen months in West Africa.

The Gazette of January 9th 1943 reported that L.A.C. Jeffrey Watkins R.A.F. the son of Mr and Mrs P (sic) Watkins of Oldbury had been promoted to Sergeant.

Jeff returned to England June 1943.  He was not being sent back home on leave though.   He was sent to the 502 Squadron to complete two extended tours as a bomber pilot over Europe.

He was commissioned in May 1944 and by April 1945 he had “completed over 70 sorties against the enemy.”  Despite flying dangerous Bomber Command ‘Pathfinder’ missions, we believe that in all he completed 82 flights and he was not shot down in any of them, neither did his crew suffer any casualties.

He was involved in a 29 Lancaster bomber raid into the fiord at Tromso in Norway to sink the German battle ship “Tirpitz” using the Barnes Wallis ‘Tallboy’ bomb.

In April 1945 the Gazette reported that Flying Officer Jeff Watkins had been awarded the Distinguished Flying Cross “for gallantry and devotion to duty in many sorties”.

He emigrated to the USA after the war and worked on top-secret jet engine development with Frank Whittle.  He settled in San Diego and carried on travelling into his old age.  He made regular visits to Thornbury and was much in demand for speaking engagements in the US and here.  He died on 30th April 2020 aged 98.