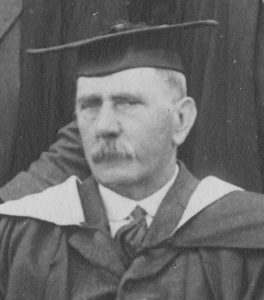 Charles Ross was headmaster of Thornbury Grammar School between 1907 and 1932.  According to Nick Large’s account Charles made significant progress in improving educational standards during his time at the school.  Apparently the pupils were entered for the first time in external examinations and so were able to go to university in increasing numbers.

Stafford Morse in his book “The Development of a Country School” also gives Mr Ross credit for his improvements in the academic standing of the school.

Charles Hackwell Ross was born on 27th August 1868 and his birth registered in Southampton. The 1881 Census appears to indicate that the family had moved to Battersea and that his father was David Ross who was then a chief clerk and sergeant major at the Intelligence Branch of the War Office. His mother appears to have been Elizabeth Ross then aged 38. Charles had a brother David aged 15 who was a boy copyist and privy council officer at the education office. He also had two sisters Charlotte aged 14 and Catherine aged 10.

Charles was educated at Sir Walter St John’s in Battersea High Street. This was a very interesting school founded by a charitable trust in 1700. The 1891 Census shows that the family continued to live in Battersea but Charles then aged 22 had become a master of languages and mathematics.

He went up to Cambridge in 1893 and graduated as B A in 1896. According to Alumni Cantabrigiensis he attended the University of Jena before becoming an assistant master at Ilfracombe Grammar School where he taught for three years. He also taught at Highfield School at Wandsworth. The 1901 census shows that he was living at Prospect House Stirlingshire (probably at Bridge of Allan) where he was a 32 year old schoolmaster of modern languages.

We understand that he also taught at Kingston on Thames Grammar School before coming to Thornbury in 1907. He married Helena Graham Rogers in 1905 in the Brentford district.

According to Nick Large’s account when Charles Ross arrived in 1907 Thornbury Grammar School had 30 pupils; when he left in 1932 it had 220.

The 1911 Census shows him and his wife living in the master’s house in Gloucester Road in Thornbury.  By this time he was aged 40. His wife Helena was aged 32 and they had been married for five years but had no children. They had three school children boarding with them – two from London and one from Surrey. They had a staff of two – a cook and a housemaid.

In 1930 the plans were drawn up for the new school building which is visible today as the main building of the Castle School Sixth Form Centre.

On 16th October 1931 H W Household wrote that Charles Ross resigned as headmaster as from the close of the spring term 1932. The letter explains that Mr Ross would have to retire shortly and he wanted his successor to see the opening of the new school.

In February 1932 Rupert Wilmot Jackson was formally appointed as the new headmaster.

Charles died in the Bournemouth area in 1956. He was aged 87.  It is interesting to note that following the Grammar School’s move to Alveston, in the form of Marlwood School, the new school adopted the name of ‘Ross’ as one of its pastoral houses.