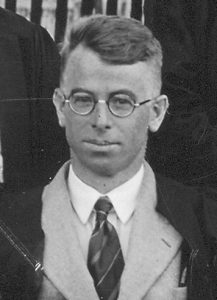 In February 1932 Rupert Wilmot Jackson was formally appointed as the new headmaster of Thornbury Grammar School.

Rupert was born on 21st March 1896.  He was the son of Wilmot Jackson a farmer and his wife Annie.  He was born in Whitemore, Newcastle in Staffordshire and was himself a grammar schoolboy, being educated at Rugeley Grammar School.  In the Census of 1911 the family farm was called Manor Farm and it was at Abbots Bromley near Rugeley in Staffordshire.

His application form for the post of headmaster at Thornbury shows that he had gathered an impressive array of academic qualifications including a B.A pass in London in Latin French History and Mathematics, a Second Class honours degree in History, followed by an M.A. and a First Class honours degree in Economics and was a Fellow of the Royal Economic Society.  He won the Henry George prize in Economics.  He had also managed to fit in two years of study in Italian at Bristol University and two years in German at Merchant Venturers’ College.

He could have chosen to teach at a University and could have pursued his research into medieval administrative history but he chose to become a schoolmaster. t may have been a testament to the higher standards at Thornbury Grammar School that such a very well qualified man would want to apply.

Rupert Jackson married Eleanor Waldron in the Auckland District in 1922.

When Rupert Jackson transferred from Cotham Secondary School in Bristol to become headmaster in Thornbury, he apparently had mixed views about the house that came with it.  He asked for four new power points and that his wife have a say in the necessary redecoration of the property.  It is not clear that any of this work was actually done.  When his successor Mr Rouch wrote to the governors in 1934 he mentioned that as he was to be responsible for interior repairs and redecoration, he would appreciate it if the house could be put in a “satisfactory condition” first as Mr Jackson had informed him that nothing had been done to the house during his time there.

Whilst Rupert Jackson was headmaster in the town it was not only his academic prowess that impressed Thornbury but his sporting abilities also.  It seems that “Jackers” was a cricketer too.   Click here to see what EM Grace said about him

Sadly Rupert Jackson did not remain in Thornbury and left in 1934.

The Gazette of Match 1940 gave us further details of his teaching career.  “Mr R W Jackson formerly headmaster of Thornbury Grammar School who left in December 1934 to become head master of Wintringham Secondary School Grimsby has recently been appointed head master of the City of Norwich School.”